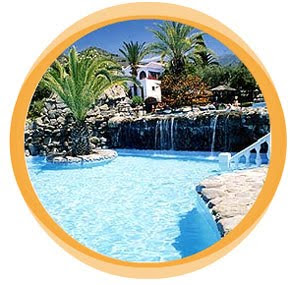 We are currently enjoying a very well earned break after the council finally allocated our attic grant - (it took 8 months and 2 politicians) and having got the credit union off my back, we are in Nerja, a beautiful village on the Costa, near Malaga.
(one of our angels is house-sitting, in case you are a burglar!)

Bratty was amazingly good on the plane, thanks both to the 2.5mls of vitamin V we gave her in the carpark, and the fantastic preparation I did at home. The D.A.A. - (Dublin Airport Authority) have prepared a series of airport photos for social stories which are available online.

All I had to do was print off the Adobe document and then pour a large jameson on ice - to enjoy while cutting and pasting all the pics' into a little story book -which I embellished with stickers of her favourite ceebeebies characters.

Between that and the iPhone Proloque2go app, which Boo played with at all waiting intervals, we had a pretty sweet ride all the way to the villa, which is gorgeous!

So while I am getting to a webcafe each day to work on my secret project, I will mostly be warming my Tumbano and swimming with Bratty and Boo. Things have improved vastly since our last trip to Nerja in 2007 (we did Santiago in 2008) but to entertain you (and remind me of how lucky we are now - here is an extract from a story from last time, first published in July 2007. Adios Amigos!

"We had a total nightmare when the Ribena Apple ran out. The local "British" mini market had promised to order in a slab of them and neglected to tell us they had been unable to; until the day when we turned up to collect them.
Prior to that we had been rationing the drinks by syringing water into the carton when the brat wasn’t looking and we actually had her drinking ½and ½ by the end of week one. But! thinking we had a new supply coming we let her use them all.
Disaster, had a long night of screaming and tantrumming which is one thing in your own home with the windows closed, quite another in a holiday house with tiled floors and windows open to the evening breeze. Not a wink of sleep that night.
I didn’t know it at the time but the private security guard for the complex, called in that night to check on the noise. The guard told my husband that he was responding to a complaint from across the road. But it was probably a lot to do with "Missing Madelaine" and for that we should be grateful that people do check.

I got a lot of looks from the Gardia Civil the next day, when I walked Bratty down to the village to get more valium from the Doctor. She was performing a perfect little kick of my ankle on every second step and trying to trip me over. They slowed down to check if it was Madeline too I guess.

I would do it all again in a heart beat of course. It was fantastic to escape from the stress of our school situation for the 3 weeks, and to really eat properly after so much tension. I put on half a stone in the first week!
Great to get a swim every day and the local people who work in the Pool bar and Supermarket in the complex were really nice too.

One funny (but mortifying) story: Bratty is trained for No 2s for over 12 months now. However she does have a rather disturbing habit of relaxing her bowels when she is in water.
We watch her like a hawk and keep bringing her to the toilet when she goes quiet and gets that look. But on a couple of occasions we were not quick enough...

The first time it happened to Hubby, while I was up in the café above the pool, with Boo having a sandwich and coke. I copped what was happening ran down to the steps of the pool and between us we discretely cleaned up and hightailed it out of there.

Second time I saw her bending a bit on the steps to the pool and grabbed by the hand, ran to the loo beside the pool bar and got her out of her costume and on to the loo in time, or so I thought!Came back out and was letting her go back in to the pool when the Pool bar guy came over and in broken english pointed to a little (now squashed) offering on the “floor” as he called it. It had sneaked out of the leg of her neck to knee swim suit as we made our dash!It was just sitting there enjoying the sun beside a childless couple's Tumbano as they swam oblivious to their new neighbor.
Grabbed some hand towels and picked it up to dispose of it, then filled my water bottle to rinse it all away and grabbed DD to run back to the house. All in about 30 seconds. I am pretty brass necked and shameless but for once I was just ready to die of embarrassment, it was that bad.

Fortunately it was a bit overcast the next day and by the following day the pool guy’s rota mean't he was at a different pool in the complex. We used the top pool after that, where the toilet is next to the pool and not next to the bar! And I bought a big pack of Huggies swimmers. She might be almost 8 but they fit fine so she cannot be the only big girl who needs a bit of back up!Of course I took her to the loo at 8 minute intervals after that, and she didn’t do so much as a wet fart for the remaining 2 weeks.But oh my lord, if there was ever a time to open up the earth and swallow me, well that was your chance, (or at least open up the earth and swallow that little turd!)

Clive said…
Have a brillant holiday - enjoy every precious second of it!

Casdok said…
Great that all your preparation paid off. Hope you all have a wonderful time and dont have to many mortifying stories to tell!
August 28, 2009 at 3:13 PM

jazzygal said…
Enjoy Hammie...may this holiday truly refresh you all.

Isn't it great to look back and see that progress has been made?

I tried unsuccesfully to comment on your previous post but couldn't...computer kept freezing. I just wanted to say that it was a great one. Again looking back and , hopefully, seing how far we've come is great. I also wanted to say that maybe you should revist the Book idea?? Maybe with a different angle to attract a publisher?? xx J
August 30, 2009 at 5:29 PM

WendyB: much needed, thankyou too. I saw a subway map printed hood on a pram yesterday!!

Grufalo Mum: it is so hot I am doing without the webcafe for days at a time!

Pamela: thanks! and it is Cava Rose thankyou (1oo% pinot noir fizz)


Skye: thanks. we have had our moments, Bratty not so great and her screaming alerted the securidad, who alerted the owners of the villa. But we are getting in a lot of swimming and sunning. xx

çCas: see the above! I have to keep telling myself we have a right to exist, and take holidays. I just wish we had the dough for a big villa with no NEIGHBORS!!

Jazz: thanks. I thought life had gotten better, then the night of the long screams happened. In a hot climate all doors and windows are open and it is even worse. We had the owners call in to the apartment yesterday. They were nice but you know, could do without it!!

Kate: I will send you a postcard if you like?? email me an address to hammiesaysATgmailDOTcom.

Lisa said…
Violeta: thankyou too! Sorry but Boo was rushing me out of the webcafe yesterday. xx
September 2, 2009 at 9:48 AM