Moving around the Spectrum: What do you think?

Can kids move along the spectrum?

In other words; can they be correctly diagnosed as having autism or ASD. And then later move on to Aspergers or PDDNOS or some other "benign" form of autism.
Or perhaps even even pick up some optional extras like Hyperactivity and Attention Deficit?

And tell me, who believes that their kids are who they are to begin with; but with intervention the test results can change?

I decided to look at this again after a conversation with Mr Hammie.
Who told me, I kid you not, that he didn't believe in this "nonsense" about Bratty's recent secondary diagnosis of Attention Deficit. (!!)

When I patiently explained how a respected Occupational Therapist had spent almost 6 months analysing and then explaining the results of a sensory profile test (The Winnie Dunne, if you are interested) and pointed out that Bratty was scoring highly in areas which would indicate attention deficit; AND that a respected and experienced Psychiatrist from the same service was supporting us with medication to help manage behaviours presenting in that same area. And moreover how our own experiences with the levels of activity demanded by Bratty in comparison to her brother would also indicate that she did have A.D.D.

But he answered "Sure they all the same thing though aren't they?"

Yes dear, I was about to answer, there is a spectrum that includes Autism, Attention Deficit, Aspergers, O.C.D., etcetera etcetera.

But I couldn't help but wonder, (going into Carrie Bradshaw mode here)

What if instead of focusing on labels and a "diagnosis" we pulled our resources together and turned our attention to symptoms, and how to relieve them?

If I get a cold or flu, I don't go to the doctor demanding a snot analysis and the exact strain of influenza that I am suffering from.
I go to the doctor, and for that matter the pharmacist and describe my SYMPTOMS, such as a nasty flemmy cough, sore head, blocked nose and they tell me which of the LATEST new medicines will help TREAT the symptoms. And I use them until I feel better without them.

So how do I relate that analogy to autism and The Spectrum?

Well, what if when you were looking for diagnosis the first thing you got was a single peice of paper that said "ASD". 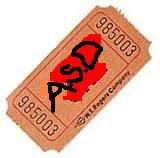 At these windows you sign up for an assessment, yes, but with that assessment comes TREATMENT.
In other words you do not walk away with a report that just describes in detail all the things that are wrong with you, but a report and a prescription for therapy that will treat the condition.

So the kid with ASD, and symptoms including poor balance and motor planning, movement seeking behaviours and stims will obviously be queueing at the Occupational Therapists window first and hopefully starting a sensory diet quite soon.

And the kid with ASD and perfect grace and physical ability but no communication is going to the Speech and Language Therapy window first, to get an augmentative communication system going, and some individualised teaching to develop imitation skills for the first steps towards speech.

And the kid with ASD who is running around the ticket office with his pants off, tipping over the chairs and laughing at the people falling backwards, then doing it again; well his harried mother will be over at the Behavioural Consultant's Queue; squeezing around the side of the window and saying "Do you mind if I go next, it is kind of urgent?" While all the folk who are just waiting for advice on Toilet training will nod and let her through.
(Sure they are all wearing wellies anyway!)

Obviously very few people are going to get away with one queue. As the first most acute symptoms are managed and improvements are seen, they will be able to see the next area to work on; and go and find help for that. Without needing a new "label".
Think of the Ticket as a Eurail Pass, that allows you to go anywhere, after you have queued up and booked your next seat.
I am going to keep exploring this, so tune in again soon.

Sister Wolf said…
I agree, labels aren't too helpful. There is so much overlap between different conditions, anyway.

Here in California, a label of Autism is helpful if you want any services.

I have watched my son move from severe social problems (he wouldn't even answer a friendly Hello from another kid) to the most popular kid in his school.

Things do change, with meds, behaviorists, and maturity.