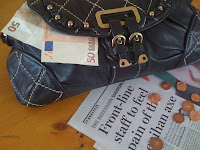 It's been a little while since my last proper post. But I have a good excuse

Bratty has recently started at Boo's ABA school; and while it is early days she is going very well.

Not the amazing conversion we saw in Boo's first week. But she is very very happy to be there, which is amazing enough considering how Bratty normally copes with change. And she has calmed down a lot for us at home.

However, it is very high maintenance, as she is doing much shorter days than Boo while she transitions, and the school is a good hike from home, hence the lack of blogging.

But I gotta say I am very very happy so far and life has got a whole lot better in the House of Hammie.

However, the same can not be said of the outside world.

The awful "R" word was rolled out this week in Ireland. We had our third quarter of negative growth and it seems the Celtic Tiger is now on a par with the Asian and Siberian Tigers; almost gone.

The tide has gone out and quite a number of us have been swimming naked. But not everyone has enough money for spray tans and expensive waxing anymore.

And it is about to get a whole lot hairier.

What does that mean for us special folk?

I guess the real fear is that all the lavish spending on infrastructure for carers and special needs has to stop now.

What's that you say? what lavish spending?

So now that a bit less is going in; there is a ready excuse for even less to come out.

It could be very very depressing. People will draw in on themselves. Charities in this country have always done very well indeed out of the free spending and very freely giving general public.

I have spent many a day standing outside a shopping centre selling badges for "Honey Day" (Downs) or Daisy seeds for "Awareness of Depression and Suicide Prevention", or just collecting whatever people could spare for the CarersAssociation.

And people quite shockingly could spare a lot. Not the folk with all the designer carrier bags either, but usually a Mum or Dad with the week's shopping in the trolley and kids nagging for treats but who somehow managed to find a spare hand to reach back into their purse or pocket to give.

And the charities rely on it. Flag days can be crucial to the year's net income for an important charity like Cancer Support or The Carers Association.

So how is it going to be for them now, when the supermarket trolley is more carefully loaded with price compared goods, and the pay pay packet that funds the weekly shop is being stretched by rising fuel costs, heating bills and other utilities. And perhaps the next pay packet is under threat as the company that issued it considers moving off shore, to save money themselves?

Scary times for all of us.

Our state treasury has already warned of less money in the kitty for all government departments, Less spending means less tax and less revenue. So don't be coming to me looking for extra dough.

Or they could just start looking for Value for Money in those services.

Which services are achieving the key outcomes in the area in which they specialise?

Is it the constipated suitcase of the Health Service which hasn't squeezed out a single hard nugget of timely assessment or intervention in the 3 years since the Disability act was, well, passed?

Or is it the parent initiated and charity funded assessment service "Solas" which has completed over 200 assessments in the year since it was opened.

And what about our education services? What has been achieved in net measurable outcomes by the state sponsored Super ASD units attached to our national schools in the last few years?

The answer is well, " a bit hit and miss". Some units are great. If your child has mild autism, got an early diagnosis and good services. And the staff in the unit have some kind of cop on and maybe even a bit of training.

But the statistics are not there, because the system is not measurable.

Many of the units as we know, have to do without any kind of clinical support from Speech, Occupational or Behavioural therapists. The ancillary staff have little or no training in autism and the teachers themselves may have only ever read about autism; before walking into the classroom and working hands on without any supervision, with severely autistic children.

Compare that to the Parent driven and administered A.B.A. schools which not only have succeeded in allowing 49 - 51% of the children to go on to mainstream education, but have achieved net improvements in the potential for all of the children who attend, and their families.

All the social work in the world could not have made as much difference to our quality of family life as having both our children in an environment where qualified staff are managing every aspect of their educational, communication and life skills development.

The program is consistent, well planned, well implemented and carefully measured. And the consistency has resulted in a much calmer living environment for us beyond school.

And all of these schools do this on a drip feed of state funding (if any) supplemented by vigorous, extensive, creative and very time consuming fundraising by all the staff, families and school community.

Which do you think offers better value for money?

At some point in the last 10, 000 years, we all got together and said if we can each give a little bit of our personal income, we can put it together and use it to improve our general well being.

It is our money, but we allow our elected government to take a little bit of it from everything we buy, a bit more from what we earn, and even a little bit more when we want to move house or register our cars.

And we trust them to use it wisely. To give us safe roads to drive on, to give us protection and justice, to educate our children and to care for all of us when we are sick, elderly or in need of extra help.

This is what makes our society.

When there is less money in the kitty, we need to smarter as to how OUR money is spent.

Which service is offering value for money?

Which service is resulting in children who will grow up to care for themselves and not be a burden on the state, families which will not break down from the relentless battles and require even more support and actively planning to do the same for young adults who can potentially contribute to rather than drain the state coffers?

When times are tough, spend smarter.

Sister Wolf said…
This is very disturbing. I'm sorry to hear how hard things are.

The very first thing that our governor Arnold Schwarzenegger did when he was elected was to cut funds for special needs kids. Luckily, the public outcry was so immediate and so loud that he changed his mind. But now he's at it again.
June 29, 2008 at 4:31 AM