Remind me again why I love you? 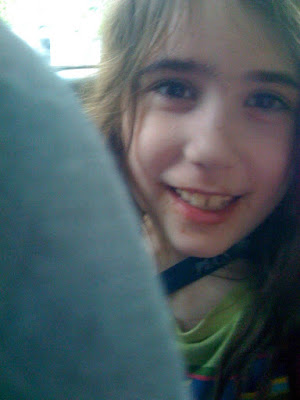 My Bratty girl had one of her 2am Fiestas last night. This time she took exception to me having a quilt and followed me from her room to mine while I tried to snuggle up and go back to sleep.
In the end I gave up and came downstairs to read blogs and wait for Mr Melatonin to work his magic upstairs. Better to be learning something than trying to sleep and resenting the small person who was stopping me. She was in a deep sleep again by 4 am so I was able to retire once more.
This morning I paid a visit to Casdok and her blog "Mother of Shrek" to see what other commenters had said after I had read it last night. And then for a change I decided to read her other blog "Faces of Autism" . I'm so glad as it is full of photographs of children and young adults who are on the spectrum, with testimonials from the people who love them.
These testimonials celebrate what makes their child special, why difference is not something to be hated or feared (a constant theme of Casdok's blogging) and it really helped to heal me.
You see the other reason I have lost sleep recently is that I went to one of those "Bio-med Cure Autism" talks on Saturday, and it really upset me to see how caught up people can get in trying to eradicate a condition that is fundamentally a part of who their children are.
And if it doesn't work (there are no comparative empirical studies to demonstrate that it will) Will they end up hating their child, as much as they hate the autism?
It reminded me of those passionate but pedantic ABA evangelists saying you must eradicate every "symptom" of your child's autism including their little stims and quirks which are just part of the child's personality really.
As you know, I believe in ABA. It is the only evidence based science for informing the management of autism and the symptoms that prevent our children from joining our world.
But I also believe that at the core of that is giving the child a choice of "doing things their way" when they want to. Giving the skills to communicate and interact with us when they need to, but allowing them to be who they are when they choose.
I do not believe in criticising anyone who finds that another method of education and therapy works with their child, and is comfortable with that.
I'm quite happy with listening to someone who says this is what works for me, and if you want to know more about it, I can tell you My Experience.
But I don't like to be told that this the One True Gospel and that anyone who does not follow is negligent.
My son who is very verbal, has that Aspergersey tendency to be very focused on what he is interested in, and in conversation can be limited to accepting nothing else, but his own view.
I find it ironic that often in these parent meetings and "talks" there are adults who are very much in that spectrum. They refuse to even consider that different people have different levels of acceptance of autism, and how to achieve the best quality of life for themselves and their child.
And in my head I am always saying "Physician- Cure Thyself"
So Like Cas, I celebrate difference daily. I also realise that the experience of having kids like mine has made me a better person that I was.
And I remember why I love them.
xx
This post first appeared on my other blog this morning. Hey, It's my birthday, do you really think I am going to write two posts in one day?
(as for which birthday, take the number 4 and the letter O and rearrange them)

Cathal's Mammy said…
I can't do small tiny print here, but let me just comment on that last point you made.......

Make Do Style said…
Ah Happy Birthday first! Secondly I think you are fantastic, I refer to you now just to bring up my little one. I'm liking the expression bit of the self. Sorry it is a 2am but already I know now to just blog or write or be productive.

It is important not to get stuck in a rut over any matter. Being open to other possibilites is helpful to adapt and move with the world.
November 28, 2008 at 10:06 PM

Nick McGivney said…
I wish you all the happiness you deserve and the continuing everlasting youthful appearance that you enjoy, jammy cow!
xxxxxxxxx
November 28, 2008 at 10:23 PM

Songy said…
Happy birthday. It's a big one. Are you doing anything special with your kiddies?

I do see lots of closed minded people. I guess that's what you came across during that talk.

K.Line said…
First: Great post.
Second: Gorgeous photo of Bratty.
Third: Ooooh, happy birthday! You know the forties beat the crap out of the thirties (so they tell me). Kxo
November 29, 2008 at 3:05 AM

As your virtual Nan I wish my virtual grand-daughter a very happy birthday (actual, seing I am a day late, let's make that a happy birthweekend) and send you big virtual birthday HUG. And trust me, it gets better and better every year from now on.

Elizabeth said…
I think as parents—of all children—it's paramount to acknowledge that there is no One True Gospel.

We tried that already, and look where it got us?

Anonymous said…
Happy Birthday, welcome to the 40 club (only the best and most elegant ladies get to join). Once again an inspiring post. You have reminded me not to fight events but to roll with them if I am to survive. I can do that.
November 29, 2008 at 7:39 PM

Seeker said…
First of all HAPPY BELATED BIRTHDAY my lovely and beautiful friend Hammie!!!!
Hope you had a great day and that your weekend will be full of hapiness, as the year you're about to begin.
I'm so sorry I'm late (facebook didn't give me a warning), but am I on time for a chocolate cake slice???? ;)

This is a great post, my darling and what calls my attentin the most is the fact that you say "the experience of having kids like mine has made me a better person that I was."
Maybe that's why they come...
And that's a great attitude, love you for that and of course for more.

Please check here I have some awards for you.

Lisamaree said…
thankyou all for the birthday wishes! Still getting used to it.
xx
November 30, 2008 at 7:45 AM

Anonymous said…
Happy Birthday, I hope you had a good one! Best wishes and mind yourself(your health is important to everybody - your kids, your family, your friends), V
November 30, 2008 at 9:08 AM

Happy Elf Mom (Christine) said…
You know what? I was mad about that comment on Casdok's blog and couldn't bring myself to comment, even though I loved that post.

C is beautiful. Someday I hope to meet him for real! I'm actually scared though that **I** will do something wrong and upset him, or whatever. But guess what, that's MY problem and not his.

Sometimes maybe our inside fears get turned outside. Do you know what I mean? Like, "what will everyone think of ME as a parent" would motivate some parents to get appropriate care for their child, and maybe motivate others to go a little over nutso and be dissatisfied if the "results" aren't to their liking.

Hopefully I am coherent, but it's a thought I've had for some time.

La Belette Rouge said…
Happy Birthday, dear Hammie!!!! 40 and fabulous.
And, I really appreciate your pov about openness to what works.You are an extraordinary advocate, mother, blogger and all around lovely gal.:-)
December 1, 2008 at 4:39 PM

Sister Wolf said…
Too goddamn right (everything you said)