The above misquote comes from an episode of the Simpsons "Much Apu About Nothing".
After a single bear wanders into town, Homer stirs up the government to provide a "bear patrol" to rid the town of bears. On their protest march to the town hall Homer chants "We're here, we're queer, we don't want anymore bears" when Lenny asks if Homer came up with it Homer claims "Oh, I heard it at the mustache parade they have every year."


The excellent Charlie Wolf who sang this song on Youtube recently has designed these T-shirts in the name of reclaiming and raising autism awareness. I saw them today on Sister Wolf's heroic Blog.

What do you think?
(click on the image to embiggen it) 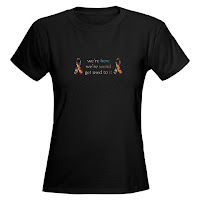 Charlie Wolf, 15, is a high school student who lives in California and has been diagnosed with Asperger's Syndrome.
He is a singer/songwriter who plays guitar, accordion, and harmonica.

Charlie also designs websites, and is producing his second CD of original music.

How do you feel about raising your autism awareness?
Should we be having a parade every year? (We could have Twirlers, Flappers, Spinners, and at the end a light show with hundreds of different torch beams.... )

or should we be trying to fit in with the neuro-typicals? Dress up in "normal" mufti and try to go unnoticed.

And does better awareness lead to better understanding, or more prejudice?

I'm out and proud, perhaps selfishly as I would rather people understood that my children have autism and ADD, than think I am a neglectful or incompetent parent.

I also feel a responsibility as a "brassneck" to try and inform and educate, where the meek may prefer to retreat. I think that is my calling.

However, I also respect and appreciate it when a parent and their child can go "undercover" and un-remarked upon; to go back in the Autism Closet if you like.

I think I love and admire those parents, as much as I do us flag wavers, because I understand the work that parent and child have put in to achieving that appearance of "normalcy". And boy, do I appreciate the level of intensive intervention that would have got them to that stage, and how much more work they must put in to maintain it.

There might be a car full of social stories, visual schedules and token reinforcement boards downstairs in the car park. There may be a set routine they are following to get through a situation that everyone else is just taking for granted.
Something as simple as a swimming lesson at a local pool, may be organised with the precision and planning of a military campaign.

But to everyone else at the pool, their little fella is just one of the kids.

We can usually spot each other, they know that the crazy lady in the wet shorts chasing a small wet haired girl across the foyer is "in the A-Club". Sure I might as well have a Tattoo as a T-shirt to show my pride.

And I know who they are, as they sit quietly enjoying their gluten and casein free crisps as a reward at the end of the "task".

But nobody else has to.
xx

For Flapjack and all the other closets who worked so hard to get there. WE KNOW!

K.Line said…
I love the T's - and what a talented musician Charlie is! I am all about out and proud. The reason other marginalized groups (um women, gays etc.) gain power is through awareness. Someone's gotta get that ball rolling!
December 11, 2008 at 12:19 AM

Nick McGivney said…
Crazy conundrum. Options to go undercover or swing. We don't get that option ourselves. We get to brazen all the stupid looks. And the sympathetic ones. And the repulsed ones. So why do we feel so weirdly connected, sis?
December 11, 2008 at 12:20 AM

Vaklam said…
Excellent points! I think so much of a family's approach to dealing with the rest of society depends on the kid(s) involved. For our part, when we sign him up for anything, we mention our son's autism up front and then it rarely gets mentioned again.
December 11, 2008 at 12:59 AM

Skye said…
Both ways have their burdens and their gifts, true. I love those shirts, and I guess I naturally incline more towards the "out and proud" end of the scale. Being open about your own situation is a gift to everyone around you too, it makes it easier for everyone ultimately.
December 11, 2008 at 2:12 AM

La Belette Rouge said…
Closets are for clothes. Out, proud and creating awareness is the only way to go, in this weasel's mind.

Half rabbit said…
I feel enough anxiety when I leave me room to not want to wear anything that might draw attention to me (don't forget to provide the shirt in sensory fabrics ;)) However if anyone else would want to wear it it's fine, the design is nice and simple and good that way (okay not a good description but I was at my horse riding Christmas party for nearly a hour and have a massive headache as a result)

Definitely a YES for the torch show. I got my new one in the mail yesterday and have been having fun ever since. (okay I admit to possibly waking people as I shone it down the entire length of the street at some strange hour)
December 11, 2008 at 8:02 AM

The Spicers said…
As someone who doesn't have a child with autism (and therefore maybe no right to an opinion), I'm inclined towards the out and proud model. I babysat for a woman who didn't acknowledge her son's autism spectrum disorder for years, and it was awkward. Everyone saw it, but she failed to mention it, ever, and I have to think it would have been easier on the kid for people to know up front what was going on. He was unfairly judged for behavior he couldn't help. Remove the element of shame, I say.
I saw a man recently wearing a t-shirt similar to Charlie's design, saying we're here, we're weird, etc, and thought it was great.
December 11, 2008 at 3:14 PM

Lynanne said…
I smiled at the thought of your parade. My son would probably need noise-cancelling headphones and the blinders they put on racehorses but I'm sure he'd proudly march right along with. :)

Seeker said…
I love this post. That's an issue that must be discussed and you puted veery well.
In my opinion the time is to fight, the conditions aren't created so the ones who are now here have to do that work for the ones who will come have a "better life". Like the sufragetes (? it's not well writen).
So I'm for the "out and proud" to at least creat awareness.
That's what I'm trying to do with people that are in the caring house my mother is (I know it's not the same, but they suffer from stigma and I feel mother is stigmatized too and sometimes I am also).

Those Ts are great and Charlie very talented.

Make Do Style said…
I love the appropriation! Brilliant t-shirts and you know do what ever you want and hang the rest. I love a bit of loud and proud. Also it is about challenging the norm to broaden horizons and get peopel to not be so 'controlled' as well.
December 14, 2008 at 4:23 PM

drwende said…
As an outsider, I'm hoping there are people who are up for creating awareness. Wider recognition that some people's brains JUST DO STUFF that requires support and adaptation -- not "discipline" or criticism -- is good for everyone.
December 16, 2008 at 12:37 AM

Anonymous said…
I think I'd veer towards the out and proud as well. I'm not a parent but work with people with autism and in a way, through living in very small town, we do well in that regard. We can go to a local pub and everyone totally accepts that one woman will like to give the place a thorough tidy while she's at it and another may like to change all the television channels (that last one's not quite so appreciated to be fair!) But I think anything that raises awareness and hopefully understanding can only be good. Hope you and your family have a very enjoyable Christmas season. I read your blog all the time and absolutely love it:)
December 20, 2008 at 6:28 PM

Lisa said…
Hammie here, thank you all for the right on attitude.if there are more of you then the newbies wouldn't find it so tough.

Nick, the rest of the world needs to cop on to diversity in all its beauty. Kidd just need to be kids afterall.

Lucie, thanks for dropping by, I am fascinated to hearabout the adults you work with and I would love to change the channell in my local pub (turn it off)
Tell us more next time?
xx
December 21, 2008 at 1:34 AM