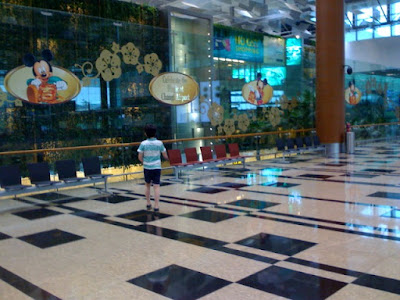 I was recently asked on this blog what the "etiquette" is when you observe a carer dealing with what we fondly describe in autie world as a "melt-down".

The question from the lovely Skye of Skylark and Son :

Skye said...Ok Hammie, here's a small question for you about autie etiquette.

During the Boxing Day (St Stephens Day) sales I was in DJs (a large posh department store) when a howling kerfuffle broke out just outside the ladies toilet.

It was a teenage girl (say about 15) left in charge of her sister (about 12) who was pretty clearly autistic and losing it big time (no doubt due to being in DJs on boxing day, which is overwhelming enough for everyone else).

Various people were standing around tut-tutting at the "apalling behaviour" of the apparently tantrumming tween and hassling the older sister.
I was unable to control my meddling bossy boots side and started saying to people in the crowd, "I'm pretty sure she's autistic." so they'd disperse and stop their crowding and disapproving carry on, which was making the situation much more difficult.

It worked, the girl calmed down.
Peace reigned once again, but I couldn't help thinking that I was:
a) presumptious and condescending to say what I said,
and
b) a bit crap in not trying to help the sister (I had now idea how, so didn't want to make things worse).

Skye: You did exactly the right thing. Had a few very public meltdowns in the last 3 weeks and in every case it is best to back off and let the carer get on with it.

If it is " behaviour" then any reaction or intervention might reinforce it, meaning it will happen again.

And if it is due to confusion and fear, then strangers interfering or watching (and tutting) will make it worse.
Explaining and getting rid of the bystanders is perfect, the only thing you could have added was to wait off side, with a neutral expression and ask if there is anything you can do to help.

Having had a similar situation last Friday on the ramp to the Crowne Plaza in Singapore, what I needed most of all was someone to go back into the hotel and get my bag (abandoned at reception in the lobby as I chased Boo out the door) so I could continue on to immigration, and get our plane home.

He would not come back with me and I cannot move him against his will anymore. So I sat on him on the ramp to the hotel and waited until someone who spoke english passed- which they did eventually. I couldn't do much else as I had fallen while chasing the Boo and twisted my knee (not seriously as it turned out but it scared the heck outta me!)

After 3 tries I got the manager of the hotel to come out with my cabin bags and he then escorted me the remaining 20 metres through the concourse of the airport to passport control.

This was a very real situation for me and the carer in the busy department store. The British National Autistic Society now has a Think Differently Campaign showing video re-enactments of such events and gives the first hand accounts of the people involved.

Making the world a more accepting place for people with disabilities doesn't just mean wider parking spaces and ramps.
It is about widening our acceptance and making allowances for diversity in how other people view the world, and how they deal with it.

Adlibby said…
I've often wondered the same thing. Thanks for that candid response. My own little doll has sensory issues and I've had a small taste of what it feels like to be the parent of a child acting out inappropriately and barely being able to control the situation while enduring the disapproving glares and stares. People do need to "think differently".
January 23, 2009 at 3:07 PM

Anonymous said…
This is INCREDIBLY helpful, Hammie. Thanks, too, to Skye for asking the question.
January 23, 2009 at 3:14 PM

The Spicers said…
This is such useful information Hammie. I encountered this situation at a playground once, with a teenage girl, and my kids were gawking and staring, so I just quietly explained to them that I thought she was autistic, but I had no idea what to say or do for the mother.
January 23, 2009 at 4:46 PM

K.Line said…
I read this in the comments, Hammie and I thought the whole exchange was great. I particularly liked that Skye had the presence to ask you (a woman of experience and skill) about the best way to manage things. Shows how people are joining forces to understand autism - and maybe other special needs too.
January 23, 2009 at 5:57 PM

Skye said…
Thank you so, so much for answering my question Hammie!

When I was in the moment, one of the main things running through my head was "What Would Hammie Do?" - get that book deal woman, the world needs you! And then you make the "WWHD" bracelets and whatnot too...
January 23, 2009 at 9:32 PM

~Tessa~Scoffs said…
I know some moms that had little calling cards made up that nicely explained their child's autism in a brief albeit gracious way. It was something like "My name is David and I have autism. Sometimes loud noises and crowds bother me..." or whatever. I thought this was a great idea but I just couldn't get myself to hand them out to strangers who were gawking when my autistic toddler had a meltdown.
January 24, 2009 at 12:54 AM

Nan P. said…
Thank you Hammie girl for the on-going education you provide me, and many others like me who know so little about this side of the world - and I don't mean OZ...! ;-)

Knowledge = understanding = a better place for all.

Seeker said…
This is such good information my dear!!!

Yes, I agree, that book must be published!

Hope you're having a nice time

Cal said…
Good advice! For most of us it is just a matter of wanting to help but not being educated on how to do so. Thank you for your suggestions.
January 26, 2009 at 5:01 PM

Anonymous said…
Ed hardy clothes in Hollywood is a very popular brand hot.Classic tattoo art and fashion classic elements included in the ed hardy clothing .Simple ed hardy t-shirts is also a work of art.Therefore it is not difficult to understand why a ed hardy shirts , simple lines is an array.Ed hardy sunglasses undoubtly are their necessary ornaments when go out. Ed hardy mens and ed hardy womens are very innovative in his admiration of the design.
Wholesale Handbags
Cheap Handbags
Womens Handbags
Cheap Purses
Designer Handbags
ralph lauren polo
burberry polo shirt
July 3, 2009 at 10:00 AM

Pamela said…
Oh boy, I have certainly been there. When my little guy was younger, my parents forced us into going to a character breakfast at Disney, despite my warnings. Giant cartoon characters and 200 screaming children is great for sensory issues. Anyway, my son punched Tigger in the face and we had to make a quick getaway. This kind of stuff happens all of the time when we're somewhere crowded. I really do rely on the kindness of strangers. Even a sympathetic look goes a long way when you're in one of those spots. Those autism cards sound helpful, but I don't think I could ever do that-- even though I'd love to embarrass those mean bystanders who say cruel things.
May 8, 2011 at 5:10 AM