The Spiral* Perm and the Dental Nurse - more honest blogging 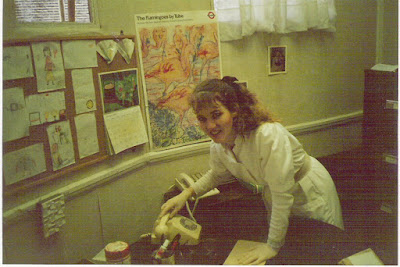 What did I get up to?

I went to London when I was 18 and 1 month and worked at the 3 most stereotypical Aussie-in-London jobs there are.

A) Nanny.
A status symbol in 1980s real estate yuppie London. An Aussie Nanny was even better.
Please note: My boss was a full time stay at home Mum with 2 children. And she had a live in Nanny. Her husband was a Real Estate Agent and they had 3 company cars. One for him, one for his wife and one for his Nanny!
She told me if I ever got a parking ticket just to put the wipers on and wash it off the windscreen. It would just go straight to the office and get paid.
That's when they invented clamping.

B) Barmaid.
I went for 2 jobs as a Barmaid when I got sick of being a live-in slave to a dysfunctional marriage.
In the interviews they asked me what experience I had apart from selling Hamburgers and I said I had read Caddie.
That was enough. I had 2 jobs to choose from. I chose the one in a 4 star hotel where Mr Hammie was the Hall Porter......

what if I had chosen the pub in Kentish Town?

C) Dental Nurse/receptionist
I actually went to the dentist to get my wisdom teeth x-rayed as they were causing me problems.
The dentist said they were fine and offered me a job instead. No more shift work!

The fact that I had no qualifications or training didn't matter. £105 per week and but no more tips.

The guy I worked for was a North London Jew of Eastern European Decent. He was an arsehole but he had a large clientele of older jewish women from The Home Counties who were just lovely.

They used to bring me cake and presents when they came to have their dentures mended.

They liked me but were very disapproving when they saw my boss was taking appointments on the Day of Atonement.

He fasted at least, but he drilled and filled all day and I put the cash in the drawer, which he banked as usual.

My favourite clients used to draw pictures while waiting in my office and I put them up on my notice board. I kept one by a little girl called Jemma Kaizic. It was a picture of me that had a speech bubble saying "I am kind" - I put it in my resume!

I did develop my slight phobia of old street people though. They used to come in and sleep in the warmth of the waiting room in the winter. Scared the shite out of me. Hey, I was 19 and from a country town.

Mrs Moroni - I know you had no teeth and the National Health paid for your new dentures, but you smelled!

ps. My wisdom teeth were actually arsed completely and I had to go into hospital and have them out under local anaesthetic. Then go back to work the next day. I couldn't speak.
Like I say, ARSEHOLE!


*Correction: My perm was of course called a Spiral Perm and not a coil perm as pointed out by fabulous Sky. My excuse is Mumnesia, and it has been 23 years>
1980's property Boom Barmaids Dental Nurse London nannying The Hotel Russell

The Schutts said…
There is no doubt about you girl... You obviously rocked that spiral perm!

Anonymous said…
I love reading about your adventures, Hammie. LOVE. Although it does make me feel like a bit of a life-living-coward. I've never lived in another country for more than three weeks!
April 24, 2009 at 2:42 PM

Seeker said…
Hi beautiful you!!!
No dear, I'm not at mainland, I'm alredy at the island. There were tough days....
Well, I'm home again :)

So you removed your wisdom teeth... me too. That's why I have no wisdom.... LOL LOL what about you?

I started my life in Ireland as an au pair, with one very nice family first for 8 months, then a quick stay back in France for a couple of months, then back in Ireland with another family - both parents Med students, with a 20 month old boy and a new born baby..., the grand parents were paying for everything! It was ok at the begining, then the baby got suddenly very sick, she also died. Within an hour of coming home, the mother Had shown me how to take care of her then had gone back to college! I was left completely in charge of a baby who needed constant supervision, who cried day and night, who had suffered oxygen deprevation during her illness... After 4 weeks, I left. I heard later that she had died in her sleep a few weeks later. So sad. But I relieved I was not there when it happened!

Make Do Style said…
Oh Hammie - I'm beginning to get annoyed with my MA I keep missing everyones brilliant posts. Loving the perm and your work - you star!!
April 25, 2009 at 8:15 PM

Skye said…
This story is a bit like Wolverine - it's an origin story and there is some specatcular hair and i suspect would also make $212 million in its opening weekend at the box office...
May 4, 2009 at 11:49 PM

Trish Hunter said…
Every year I go through a faze that I want to get a perm.
I even went into a hairdresser once (very nervous of course) and they refused to do one!!
Probably a good idea, as I get over the faze until the next year.
Hahahah at your comment!!
No such calls from any talent shows.
I'm oh so very disappointed.
I'm just keeping my fingers crossed for a walk in roll on neighbors. Hhahahahaha. Errr no.
May 9, 2009 at 10:46 AM