on March 24, 2012
In the next few days I am going to write a long article about Niamh Cadogan. At the moment it hurts too much to think about it for too long. I have been looking at her emails she sent me, which included a lot of photos and this one just made me smile. I think we were both trying to get Liam to look at the camera and say "cheese" and he just kept on saying "Camembert" in his deep teenage voice and playing with the iPad. 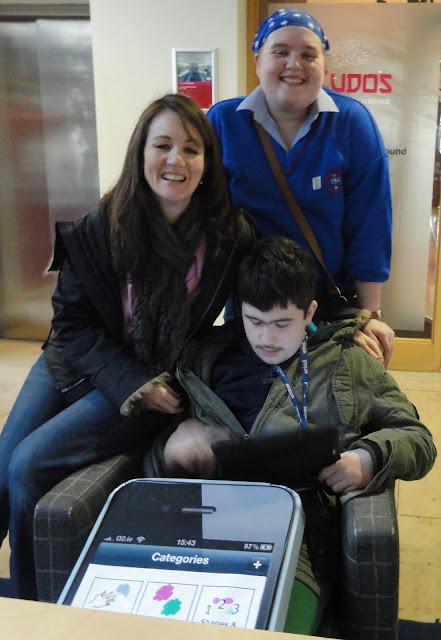 This was the day she came to Dublin with the Munster Lions Club for the judging of the All Ireland Lions Club Youth Ambassador. I brought her 2 props; one was my giant "iFoam" with the Grace App on it and the other was Liam, my 14 year old son who sat and played with the iPad while Niamh and I chatted to William from the Lions club and her mum Jean.

While I adore and cherish both my autistic children; if I ever get a bit of time off I have to confess that the very last thing I want to do is meet other people's autistic children.
(forgive me friends but it is the truth)
And yet over the course of a pot of tea and 4 chocolate chip cookies, Niamh demonstrated the same empathy and patience for Liam that she had obviously learned from her own autistic brother Stephen.

One by one she coaxed each of us to give up our cookies and give them to Liam, while at the same time discussing her project and the small part I played in it, for the benefit of William from the Lions.

She won of course. xx

Lisamaree said…
Thanks K. It is very sad. Candi, thank you.
Sharon: it is a wonderful photo. I did have a laugh when I found it last night. Liam being an autistic teenager and Niamh's very genuine joy at the situation.
March 25, 2012 at 1:27 PM

jazzygal said…
So sorry for you Hammie and for Niamh's family too. It is so sad and cruel to lose someone like Niamh.

I look forward to your longer article.