on April 06, 2013
The amazing Temple Grandin was in Dublin this week for an Autism Conference.

Her TedTalk bio describes her as:  "diagnosed with autism as a child, talks about how her mind works -- sharing her ability to "think in pictures," which helps her solve problems that neurotypical brains might miss. She makes the case that the world needs people on the autism spectrum: visual thinkers, pattern thinkers, verbal thinkers, and all kinds of smart geeky kids"

Temple Grandin has an an enormous impact on global thinking about autism and the potential of autistic thinkers to contribute to society. But her greatest gift to parents is helping us understand the how and why that our children see the world and act the way they do. It helps me to empathise with my children's autism and see the same tendencies to be visual and spatial myself.

Her book "Thinking in Pictures" describes how she is able to build entire visual systems in her mind. She can envisage something in detail and see it from every angle, as whole. It must be a bit like one of those 3D games that you wear special goggles to play but without having to pay someone to write the code. It is a huge advantage when it comes to actually building effective and humane systems like the livestock handling corrals for which she is famous.

We parents see this "whole picture thinking" in our kids when they begin to draw like Sean Mulligan who you met in my last post.

Today I want to introduce you to Dash*, another gifted visual thinker. His Mum describes him here:


"Dash is 10yrs old and was diagnosed with autism 6yrs ago – not the high-functioning / genius type that you would hope for, if your child was to be affected by a condition, but at  the classic pre-verbal end where the challenging behaviours and intellectual disabilities lurk.

He is a handsome, happy, lovable boy who loves Thomas the Tank Engine, The Gruffalo, Music and Drawing.

We are lucky, Dash is now verbal but his language didn’t develop as a typical childs did.

In the early years, to help encourage language we read lots of books and sang lots of nursery rhymes.
To help reduce Dash’s upset and stress we would sing routines and I am convinced that it was his love of rhymes and songs that ultimately encourage him to talk.

Today Dash language is still very echolalic. He is very good at labelling & requesting and can recite massive chunks of Thomas the Tank Engine, several Disney videos that he loves and many many many nursery rhymes

In the early days to help encourage improvement of Dash's fine motor skills, we bought a ‘doodle-do pad’ (Dash’s word for it) which is an etch & sketch to the rest of us, and it was through his doodle-do pad that we discovered Dash's love of drawing.

Most of Dash’s drawings are characters from books or programmes /dvds that he loves, or covers of his books or dvds too, and to say that he is prolific is an understatement!!! 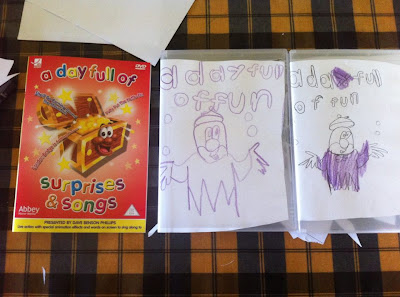 We currently go through about a ream of paper a week and the best thing you could buy Dash is pack of printer paper and a set of colouring pencils.

Of course as with any ‘passion’ there is always a down side – Dash’s love of drawing unfortunately isn’t restricted to paper.
We have over the years have substantial amounts of art work adorn our walls / windows / roller blinds  and he is so generous with his artistic skill he doesn’t restrict it to our house and has been known to leave “mark” on the ceiling of friend’s houses (sorry Katy )  – Michael Angelo eat your heart out :D"


Dash might have started his drawing career with an 'Etch a Sketch" but he was born into an era of iPhones and has recently begun to take selfies, which demonstrate not only his talent, but his eclectic musical taste: 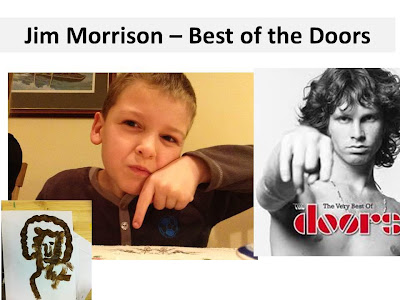 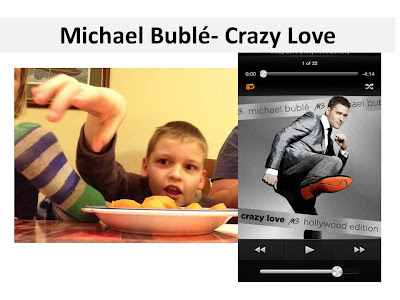 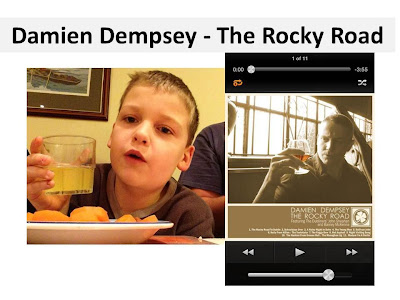 Hi Damien - just wanted to share this picture with you. This is my son "Dash' - he is 9yrs old and autistic - but he absolutely loves your Rocky Road album (good taste in music ehh? :D) and this is him recreating the album cover today.
Hes been taking pictures of himself posing with a glass on my iPhone for a few days but it has taken us days to figure out what he was doing.
It was only today at dinner when he said 'Damien Dempsey music' that we twigged what he was up to.Thought it was cute and would share that your music touches many.Dash particularly likes your version of the Twang man and Kelly From Killan - so we get to hear them repeated over and over daily Hope this brings a smile to your face, as much as it does to ours,

"Thanks very much for that, it warmed my heart. I should take a leaf out of  'Dash's' book and try what he's havin, it looks a lot healthier!
Tell Dash to not go chasin the twang mans mot, or any other oul hen! Gra Mor, Damo."

Seems we can all be amazed by Autism.

*name changed to protect the identity of the artist, until he decides he wants to be famous.
Artistic Autism. Autism Autism Awareness and Acceptance. Cool stuff Damien Dempsey Gruffalo

You a star Hammie and have personally helped me so much on my journey along the road of an autism mum - so thank you xxxx
April 6, 2013 at 11:40 AM

Jodi Hill said…
What an inspiring and talented little guy Dash is!
My 7yo with autism also loves to draw and spends hours every day drawing on his mega sketcher.
April 6, 2013 at 12:48 PM

Andra said…
Disney Pixar will be knocking down the door for Dash in years to come, very creative and talented young boy.
April 6, 2013 at 1:27 PM

jazzygal said…
Talented and with taste! It's amazing the artistry skills our kids can have...a very useful asset.

Well done Dash and his parents ;-)

Sharon McDaid said…
LOVE his Going on a Bear Hunt picture. Dash is one very cool kid.
He shows how clearly he sees things with those photos- it's similar to how my son used to dress up as characters he likes using all sorts of items to accurately recreate the look. He could see what he was aiming for far better than I ever could.
April 9, 2013 at 12:33 PM