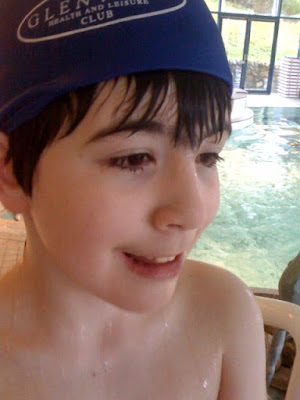 Boo at the Glenview Leisure Club Pool
So, what am I up to with the new "behaviour" curve we took before Christmas?
After consulting with my big sister, a mother of a teenage boy; I realised the need for a lot more exercise for my growing boy. Der! you say.
Apparently it is well documented that adolescent boys need regular exercise or they start to exhibit aggression. And in the dark afternoons of December we lost the habit.
When I was 11 I lived in the country so for exercise I would:
Ride my horse, ride my bike, play complicated chasing games involving boys taking my hat and putting it up a tree, (what was that about?) climbing trees to get my hat back (I'm an excellent climber) forming gangs and making huts, raiding and eventually knocking down other gang's huts while simultaneously trying to defend ours;
and, since it was 1980; disco dancing.
Seriously - imagine a darkened century old school hall with colored cellophane over a few lights and a p.a system playing "I was made for loving you babee, you were made for loving meeeee, I can't get enough of you babee, can you get enough of meee?"
(I believe I kissed Justin Tuddenham also age 11 to this song, I wonder does he remember me?)
My kids autism (with regard to safety and social play) and good taste (with regard to disco) precludes that. So here's Boo in a Wicklow Hotel leisure and fitness club, wearing his hat so he can get a Pepsi after his swim.
Seems to be workin' so far.
xx

jazzygal said…
Have to say Hammie, all recent pics show a very happy & calm Boo! So the camera does lie after all!!

It's hard when their behaviour is difficult....but SO good to see their "happy" moments. He looks great.

Nan P. said…
My! Your "activities" at age 11 sound "very interesting"... At least they were varied.

I congratulate your kids on their musical good tate.

Skye said…
Pretty sure I was at that disco too, or one very much like it at any rate. Except I pashed this really horrible kid called Joe Kerr (Joker, what were his parents thinking?) who had a digital watch which played "Yellow Rose of Texas". He was also known to frequent the BMX track, and I would go down there with my old non-BMX bike and ride around hopefully.

Boo looks so happy there, boys of any age desperately need to get their little testosterone charged bodies moving, or they just about explode.
February 5, 2009 at 10:26 PM

Make Do Style said…
Awh such a cute sublime look! Oh yes boys are a bugger with their changing bodies - I dunno why girls get all the stick!
February 6, 2009 at 10:00 AM

Anonymous said…
Exercise, is there nothing it can't do? Strangely I was just playing that song on my ipod (because I totally refuse to grow up and stop disco dancing).
February 7, 2009 at 7:42 AM

Well, for the Boo pictures seems well, because he looks so well aand relaxed.
I think that exercising will be very good for him.

Hope you're feeling good, my dear.
Enjoy your time and have fun

Anonymous said…
Yeah, I remember spending most of my childhood on the street - riding bikes, playing elaborate games of hide and seek, and generally running about like silly buggers. I have no idea what kids are meant to do over here when it gets dark at 4pm!