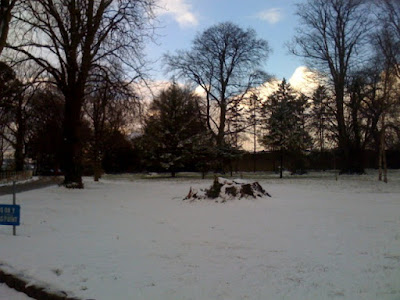 So, yeah, the whole going back to work thing has been pretty funny and I am learning some things about myself that I didn't fully understand last time.

I don't know if you understand Aspergers Syndrome - a form of autism; but one of the aspects of it is the tendency to take things literally and therefore not understand turns of phrase.

There is a joke that explains this tendency

Q: How do you diagnose Aspergers in a typical classroom setting?
A: Go into the classroom and give the kids a stern lecture finishing with
"and you will all have to pull your socks up"
-then count the number of kids with their heads under the desk adjusting their socks -you have your Aspies.

(told that at a Psychology Conference once- how they roared!)

Since having my kids and doing a lot of reading about autism I have recognised my own aspie tendencies (and hyperactivity/obsessiveness) but it is only since I have gone back to work that it has really given me cause to think. Because I genuinely cannot tell if someone is being sincere. The irish have a tendency towards obfuscation that comes from being a bunch of poets and writers who excel at painting little picture circles around words.

Contrast that with us Aussies and people from North America, South Africa and other ex-British colonies where a large proportion of the population speak english as a second language.

You learn to be very direct in these cultures as there is no room for nuance or subtlety - we say what we mean.
Do this in Ireland and people think you are Rude!

So coming to Ireland as a post-colonial and aspie has meant I do not understand a great deal of what is said. And it has served me well.

For example: the phrase "It's well for ye" went completely over my head.

To explain: when someone hears you are doing something nice like going on your holidays to Spain in springtime they say "It's well for ye"
And I think "yes it is, I am sure I will enjoy the well earned break, thank you very much"

But what they mean is: (sneery voice)
"it's well for ye going on a foreign holiday ye cute hoor while we all slave away here"

so not very nice (and very begrudgey!)

But not knowing meant that I didn't know when people were being mean and I could go happily on my way without worrying whatever the sneery buggers thought.

That particular example was explained to me by my husband several years ago, but there are countless others which I still do not understand and I think I am better off for it.

Because an obsessive and results focused person in the workplace can tread on a lot of toes; and that can be a problem as I am also insecure and in need of constant praise and validation.

So not noticing when everyone around me is re-positioning to try and micro-manage, or distance or attach themselves to whatever I am doing; really helps.
I just plow on, get what I want done or fuck up and admit to my mistakes quite happily, without worrying.
I suppose if I was locked into a corporate setting it could be dangerous, but my hyperactivity precludes that; I would be bouncing off the walls! (and some offended executive might bounce me out of a window)

To be fair it is not just in Ireland that my ignorance has been a strength.

I didn't understand the phrase "tired and emotional" either.
And I wondered for a long time why my boss was so impressed with an order I got one Friday afternoon (obsessives work late) from the senior women's wear buyer of a large elite department store in Sydney.
He had chuckled about me getting to the buyers when they were "tired and emotional" as if I had pulled some feat of great cunning. I couldn't understand how being tired and a bit sad would make someone more likely to give me an order. Had I worn them down?
It was years before I realised the buyers were probably just back from a boozy lunch and feeling munificent. Who cares? I still got the order!


xx
Photo is nothing to do with the story- it snowed today and this was the view towards the convent where the kid's school is. Nice huh? Hey, maybe it is a metaphor for obfuscation??

K.Line said…
That joke is hilarious. I can totally imagine you bringing down the house! Did you make it up??

PS: As a working mom with some pretty extreme tendencies to organize and control (myself, my world, the universe), I can relate to how tough it is.
February 1, 2009 at 10:06 PM

Nan P. said…
As I was reading this post, I kept thinking "hummmm, could tick a few boxes here!" It has indeed taken me a long time to
a. understand English,
b. understand Irish English,
c. go beyond the words and "get" the non-spoken.

And you know what, I adopt the Irish way when THIS suits me, and I plough ahead in a very French way when THAT suits me. A bit of both, depending on the needs and the situation... and I get away with the proverbial murder, e.g. with what I want!...

Anonymous said…
Isn't it ridiculous that focus and drive in the workplace - be they Aspergers-driven or not - are feared and frowned-upon? I'm glad that you've got more of a read on Irish culture, and doubly glad you're still going to keep being your same old ass-kicking self!
February 2, 2009 at 4:44 PM

Te said…
I know what you mean, but from different experience. I went to school in Ireland for a month when I was seven. Did not fit in at. all. I however, went in the opposite direction as you, I understood every single snide remark...and then some. But I guess I wasn't a little angel myself...I was constantly being told by the other kids 'I'm fer tellin'...took me 3 of 4 weeks to realise what they were actually saying.
(Oh, and it's still same old Te, just have a new blog ;))
February 3, 2009 at 9:31 PM

Make Do Style said…
Had I not been in my snow obssessed life I would have read this earlier. I love it!!
The joke is funny but I bet when I was little the first time I heard such a phrase I would have pulled my socks up.

I do think we all have an element of what is now referred to as autism/aspergers/ocd type behaviour of varying degress/elements.

I've learnt so much since learning your blog about autism, I knew about it but as you can imagine like most people were blunted by ignorance. Yet, at the sametime I think in the UK the MMR controversy isolated some parents of autisitic children because the debate became about blame/chance etc.

As for use of language - I think it isn't restricted to a language more a cultural expression of the language. I've always been blase about comments - doesn't mean to say it doesn' hurt but I always think if you say something mean its the deliverers problem!