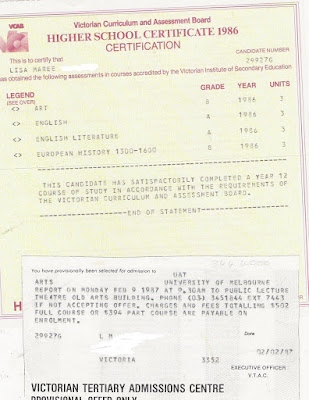 Young Beautiful and Melbourne based Te recently awarded me the "Honest Weblog Tag".
Te has the Bachelor of Arts that I should have come home from London to complete (more about that later)

She is now, very sensibly going to do her traveling - to Spain very soon. Oh and she has worked with Special Needs kids.

So basically if Sliding Door's two Gwenyth Paltrow's were seperated by 20 years, without having to sleep with John Lynch or get hit by a van... - well, you get the idea.

The Rules:
This Award is bestowed upon a fellow blogger whose blog’s content or design is, in the giver’s opinion, brilliant.
“When accepting this auspicious award, you must write a post bragging about it, including the name of the misguided soul who thinks you deserve such acclaim, and link back to the said person so everyone knows she/he is real.
Choose a minimum of seven blogs that you find brilliant in content or design. Or improvise by including bloggers who have no idea who you are because you don’t have seven friends.
Show the seven random victims’ names and links and leave a harassing comment informing them that they were prized with Honest Weblog.
List at least ten honest things about yourself. Then pass it on!”
Since when was I ever genetically capable of being less than honest in this blog?

I mean my Indian-name* is "Too Much Information"

So as Madonna said to Warren Beatty in "Truth or Dare/In bed with Madonna"
Why Stop Now?
1. For most of my life I have wanted to be a witch.
While I have no fascination with the occult, I have loved good magic since I was a very small girl. So small in fact, that is was a very big deal to stay up until 7.30 on Sunday nights to watch "Bewitched" in the early 70's.
From the aforementioned Samantha and Barbara Eden's Jeannie (a genie I know but still magic) to Sabrina the Teenage Witch on Television and my dear friend Harry Potter in Books.
If you are into psychoanalysis - I think it is a metaphor for the power of affirmation.

I was supposed to take 5 subjects for which I would receive points out of a hundred based on my 4 best subjects and 10% of my fifth. Even at 17 I just couldn't see the point of studying all year and passing a 3 hour exam to get a maximum of 10 points. So I successfully argued (a skill I developed early) my way out of the 5th subject and enjoyed an extra hour of leisure each day.

I got 2 A's and 2 B's in English, English Literature, Art and European History- The Renaissance and Reformation; got accepted into Melbourne Uni - then deferred.
22 years later, I wonder are they still holding a seat for me; intermittently looking at the clock and sighing?

3. Having no idea that I would do so well, I finished my exams, turned 18, got a coil perm and then scanning the job search pages in my local paper: applied for a job as a Nanny in London. I got the job and after passing my driving test and spending Christmas in Sydney with my cousins, came home, packed 2 suitcases (one clothes, one books) and drove to the airport to catch QF1 to Heathrow via Singapore and Bahrain.

We picked up my exam results on the way to the airport- cannot imagine how things would have worked out if I had got them a month earlier?

Okay, I'm bored writing this now, especially since everytime I go off to do a link I can see much more interesting things to read about on other blogs. So I will take a break and tell you to come back for Part II of a 3 part series. Including a big revelation in the third part.
xx

Te said…
Yay I love this! I've wanted to know more about how you ended up over there for ages. So now I'm already imagining you in London...a summer romance..Mr Hammie. Also, was quite nice to see my name on your post title when it popped up on my feed, I though...'that can't me about ME' :D Oh, and I'm glad there need not be any sex with awkward looking people, or van incidents. Can't wait for part II, you're just as interesting as those other blogs which keep distracting you!
April 13, 2009 at 12:53 PM

Anonymous said…
You are, hands down, one of the most fascinating people I've ever encountered.
April 13, 2009 at 2:27 PM

Gosh...these Tags are getting complicated!! Very interesting and fun tho'!! Well done Te.

p.s. I wanted to be a witch too! Duh! I wore long velvet dresses and carried around some book by Alistair Crowley. Hahahaha!
April 14, 2009 at 8:28 AM

Lisamaree said…
Well Te: it was a Summer/Early Autumn Romance. Still deciding how much to tell.

Sal: thankyou. I don't feel that way at the moment!

Jazz: these are my favourite kind of tags. Stick around.

K-line: will do, was looking for a photo of the coil perm today.

La Belle: it was Always about the bottle. Sabrina's auntie magicked one up once.


Nan: up to my eyeballs in 9 year old satanic children. Will do my best.

Skye said…
We called them spiral perms in my day (which was more or less the same day as yours), and I got one in 1986 too (although I was 14 and my whole hair was asymmetric razored on one side and chin length on the other and then spiral permed, eek).

I'm enjoying this story muchly, the murky past of the Hammie comes blinking into the light!
April 19, 2009 at 9:48 AM