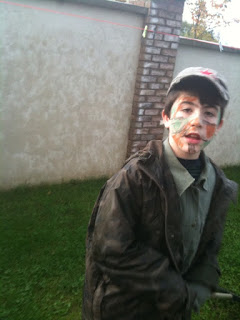 General Rogard: You realize how much hardware I brought out here? You just blew millions of Uncle Sam's dollars out of your butt!

This is Boo practicing his Halloween Costume for tomorrow's school Halloween dress-up and party.
He made a late switch from Woody (from Toy Story) after the girls from Hamleys painted his face in camoflage on Sunday in Dundrum - Woody doesn't wear make up see? 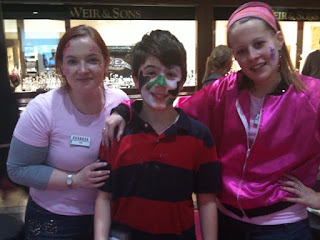 This was a relief as I have a rule that I only do home-made costumes and the cowboy boots with a cow hide waistcoat were proving difficult to source.

Whereas combat pants, a safari style shirt and camo-raincoat came to €15 in Enable Ireland.

General Rogard is a "Baddie" according to Boo. So appropriate for a Halloween costume and during my Wiki search I found he has the best lines too.

And though you may not realise it - we are looking at a vision of imagination, of ability to follow a theme, to make independent choices, and to "pretend" - he even does General Rogard's voice.

For anyone who ever believed in The Impossible - this is my Boo! xx

Lisamaree said…
Pamela: Yuech! we can't have the Pink Power Ranger now can we?