on January 24, 2010
Just watched "Working Girl" - one of my favourite films, and not for the hair or shoulder pads. 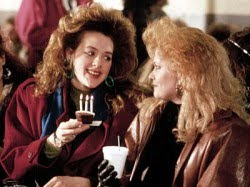 Firstly, it's about breaking free of where you are told you "belong"

Well, as much as I love my family and I have come to love my "home town"
I was never going to stick around and take up the safe and steady job in the Commonwealth Bank.

So like Tess I crossed the water to the big city. For Tess it was the Staten Island Ferry. For me it was QF1
which in those days went Singapore, Bahrain and then London. No stopovers.

I used the education I had, and made the most of it. I have never been to night school like Tess. But I did do a few weeks of Japanese and a First Aid Certificate. When I wanted to be an Air Hostess. (it was the early 90's, it was a glamorous job in those days)

But mostly I just learned as I went along, took on extra responsibility where it was offered and tried to move up the chain of promotion by merit.

I was pretty naive a lot of the time. Did not realise when I was being exploited. And a lot of the time I wasn't that aware of the kind of chess moves that some people make to position you to their best advantage.

Ten Years out of the workforce and I am most certainly a little older and wiser. And I bring the experience I gained being a mother of kids with special educational needs with me to my new "career".

Like Tess, I read, I absorb and I spot ideas where they are. Wherever they are.

Not neccessarily in Time or Forbes, but also on Page 6.

Or Blogs or Facebook or Twitter or The Sunday Independent Glossy Insert Magazine that's a week old by the time you read it, or on the radio or the side of a bus.

The point is that the information makes sense to you. You spot the trend. You bring it to the equation. You know who to tell.

Like Tess I've also learned to network. If you don't have a skill, identify someone who does and get them to help you. Chances are they will spot your skill set and do the same.  But this time it's mutual.

And when I have that idea, I try to see it through.

Sometimes like Tess I see them pushed under the carpet. Not always sure why. But I guess after that I am more inclined to follow my own leads and make the next idea happen myself.

I often feel anxious. There are always grey areas that are outside of my control and being the sort of person who takes chances, puts me "out there" where things can go wrong.

But thanks to my kid priorities I try to identify those anxiety hot spots and confront them.

But don't take it all too seriously. I might have a head for business, but I have a body for well, stamina!

Oh, and a really supportive bloke.

Looking for Blue Sky said…
Yay like it Hammie! That film was an inspiration for us real working girls in the 1980s, who hadn't a clue what to wear, or how to behave, and wanted to climb the career ladder and have fun at the same time.
January 24, 2010 at 10:13 AM

Lora said…
It seems to me that the knowledge and wisdom that one gains from being a mother, especially of a special needs child, is far more valuable.

I don't recall seeing the movie but I do remember what it was like in the 80's working and trying to be competitive in the job market.

I am sure that you are much wiser now and have more experience to take with you in your most important role as MOM.
January 25, 2010 at 11:07 AM

IrishMammy said…
Love this post, it is true being a mother brings you much more experience and I at least have found I have become calmer in crises as with little ones you tend to have several a day!
January 26, 2010 at 9:33 AM