on December 28, 2010
From the Excellent Prosperity.ie Blog
Originally Published as an Ezine on  8/12/2010
Written By Elaine Larkin
An iPhone app developed in Ireland has been awarded a WSA World Summit Mobile Content Award this week in Abu Dhabi.
Lisa Domican, a mother of two children with autism, travelled halfway across the world to collect the award for the Grace App for Autism which was recognised alongside apps like he Guardian, Marks & Spencer and Angry Birds. 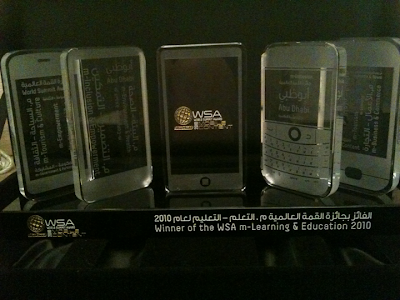 Organised by the International Center for New Media (ICNM) in Salzburg, the World Summit Award Mobile is a global initiative within the framework of, and in cooperation with, the United Nations World Summit on the Information Society (WSIS), in collaboration with UNESCO, UNIDO and UN GAID. The WSA-mobile is the only ICT event worldwide, which reaches the mobile community in over 160 countries and is able to promote the best mobile content and innovative applications out of this huge selection.

Developed by well-known app developer Steve Troughton-Smith, with input from Domican its creator, the app was inspired by the needs of Domican’s daughter Grace.
The Grace App for Autism helps autistic and other special needs children to communicate effectively, by building semantic sequences from relevant images to form sentences.

The WSA World Summit jury found: “Grace serves as a superb example of real-life benefits that only mobile technologies can bring to enhance the learning process.” It also said that “the application’s grounding in real-life experience, its usability, and simplicity and, at the same time, customization/personalization features are what make Grace an excellent example of mobile technologies’ contribution to the learning process, one for others to emulate.”

Domican explains that before the Grace App for Autism was developed she had pictures Grace used to communicate loaded onto the photo album of her first iPhone. “Gracie was using it but the correct way to use Picture Exchange is to put the pictures in a row because you’ve got three or four pictures on the screen. Because no one had an iPhone three years ago no one really knew how I could do that.”

The making of an internationally-recognised iPhone app

So how does one find someone to do that? At the time, explains Domican, she was doing social media for Irish Autism Action and regularly read Damien Mulley’s Fluffy Links blog which mentioned Steve Troughton-Smith, a very successful – and young – iPhone app developer. Domican contacted him via Facebook. “I described the project and he said ‘this is a good thing, I want to do it.’ 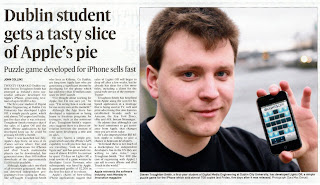 ”He was able to develop the app the way Domican wanted it to be developed. When they met, Domican had Grace’s big plastic A4 folders of pictures, what she had tried to do as regards a portable book and had also drawn what she had thought of in diagrams. “I was kind of embarrassed I didn’t have a big enough piece of paper so I went into Boots and got a Boots shopping bag and ripped it open so it covered the whole table.

He said ‘this is perfect because I have to have everything joined together so I understand what you want.’ He went home that afternoon and created the prototype.”
They had a long way to go from there – for example they had to source original artwork – but it was a quick start. The graphics had to be tested on children with autism through trial and error to ensure each image portrayed to them what it was supposed to.

Organic growth of an app
Then the app managed to grow organically through Grace’s use of it. “When we set up the prototype and Gracie was able to put her pictures in a row, I realised I could use the iPhone camera to add pictures on the spot. I would go out of the app to use the camera, take the picture and then be able to move it across.

“Gracie got hold of the phone one day – she’d been watching me do this – and she had found an old toy on eBay that I had donated to charity about three years before, it was a Teletubbies toy. She was holding the phone I could see that she was trying to take a picture. I realised if the picture was inside the phone she knew that I knew she wanted it. She could have just pointed to it on the screen but she was putting it in the app.” 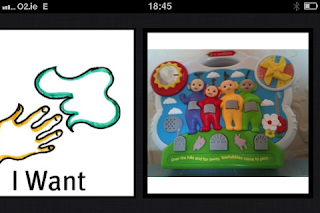 Another little girl did something similar in her trial of the app so Troughton-Smith incorporated the feature to take photos from inside the app.

This facility teaches children with autism trust that they can express themselves and that a parent understands what they are expressing.

The Grace App is available on iTunes and a fund has been set up to help bring iPhones and iPod Touches to children with autism whose family cannot afford to buy them. To learn more about how you can help see:

jazzygal said…
A fabulous write up for a fabulous ("in it's simplicity") product. And another well deserved award. Well done again Hammie, it is a terrific job that you have done.

I love to hear of simple innovative ideas from which new businesses arise. It is the future for our poor little country. there is an additional joy when the "new business" is a learning tool for Autism :-)

Nan P. said…
I agree with Jazzy, it is people like you Hammie who can help us get out of our economic mess, as well as helping those who are so precious... Can't stop saying it: Well Done!
December 30, 2010 at 5:41 PM