Two Steves who changed my world

on October 19, 2011
I was terribly sad to hear of the passing of Steve Jobs; before you ask - yes, I read about it on Twitter, on my iPad as I was having my first coffee of the day.
Yup, I'm an Apple Fangirl but unlike the many others who took a bite of Apple Artistry and found they wanted more, I came to iWorld by a different route.

You see I am the mother of 2 autistic children who have both had severely delayed communication and as a result, extreme behavioural challenges in their lives.
Both eventually learned to communicate their needs using "pecs" which stands for Picture Exchange Communication System. To put it simply; when someone is not talking they often develop other techniques for getting what they want. They might start by leading you to the fridge or cupboard to get them a drink or snack, but if they can't get your attention they can try grabbing, dragging, pulling hair or biting you or themselves. Your natural reaction to quickly get what they want reinforces the negative and pretty soon you have a very challenging and frustrated child.
The picture exchange system teaches them to hand you a picture of a drink, which you quickly reward and little by little you replace that negative behaviour with a vocabulary of different pictures for different things, all of which have huge value to the child. At the same time you are pointing to the picture and saying the name of each item in order to encourage the development of speech. My son learned to do this at age 4 and within 3 months he had started speaking without the pictures and no longer needed the prompts.

My daughter who is a year younger than her brother was introduced to it at Age 3. She took to it well and by the age of 6 had over 400 pictures in her vocabulary - but could barely say a word. Her pictures were stored in a book that I had to carry everywhere, or risk the return to tantrums and it was a huge commitment that was difficult to keep up.

Then I met my first Steve;
Staring out of the window of our car as we paused at the lights on the Stillorgan Dual Carriageway, I noticed a huge O2 advertisment on the side of the 46A. It was the iPhone but what grabbed my attention was the little pictures on what appeared to be a glass screen. And I wondered if it would be possible to put Gracie's pictures on that little screen..
I was lucky enough to meet the CEO of O2 at an autism event shortly after and blagged myself this wonder of technology with the little glass "touch' screen. I admit, I was afraid of it at first. I knew Windows and could do a bit of Word etc, but could not be described as a "tech" person in any sense.

However, the real wonder of it was that as soon as I had worked out how to turn those 400 pictures into jpeg, put them in an album and transfer them to the iPhone, Gracie could access them.
She didn't care about the ten years of research, development, prototypes, company takeovers and new CEOs.

All she wanted was a croissant and at the squeeze of a home button and swipe of a touch responsive screen - she could point to the picture and get one. Simple. Useful. Beautiful
Now instead of carrying a giant ugly A4 folder of crumb covered velcroed pictures everywhere, or deal with the tantrums if we didn't; we just had my iPhone. The pointing, the prompting and her developing vocalisations could now happen consistently wherever we went. And Gracie's world began to grow.


Many people would say that this would have happened eventually anyway without Steve Jobs Apple but I don't agree. Yeah, there were touch screens available and the technology to install stuff on them but they were draggy to use, the programs were expensive and inflexible and not very inspiring.

Steve Jobs was the one who brought the best out of the designers and engineers, who told them to start again when it wasn't beautiful, and useful and simple and perfect. Steve Jobs was the inspiration for the millions of fan-boys and girls and devotees who wanted to take this new world of Apps and become part of it themselves...

And that's where I met my second Steve; The (VERY) young iPhone games developer who was only 10 when Gracie was born, who got his first Mac for his 7th birthday and who read my email asking for help. He met me, listened to my story and seemingly intuitively interpreted my vision for a single app to replace that big picture book.
Steve Troughton-Smith coded and co-created the Grace App that has genuinely given her a voice of her own. Steve Troughton Smith was the first person to tell me about this "Tablet" thing that was coming that would be perfect for teaching younger children to use pictures to communicate without anyone ever having to photograph, print, laminate and velcro a picture to create a sentence board again.(And Grace App was one of the first iPad Apps in the store on the DAY that iPad was launched)

Yes, Gracie might have learned to talk using the old pictures eventually. But my interest, energy and commitment were waning and we were not prompting her consistently where ever we went.
Yes, Gracie might have learned to take photos and ask for things independently on another device, but the navigation and interface were lacking in everything we tried up until that first iPhone - and she couldn't make a sentence with the pictures.without the dedicated App that was named in her honor at the suggestion of Steve.
Gracie might just be saying "Drink" and "Chocolate" and "TOAST" instead of;

But the best part, the part that made me sit in my car and cry as I listened to Steve Job's Stanford Address on the radio on Thursday morning ; was when I was in Australia in February for my Grampa's 90th birthday and calling home to check on Daddy and Gracie back in Ireland.
Daddy held up the phone for Gracie to hear my voice and for the first time, after 11 years of waiting I heard: "I want - Mummy"

Farewell Steve Jobs. We will miss you but thank you for inspiring Steve Troughton-Smith who along with all the other inspired and gifted "Steves" will continue what you have begun. xx 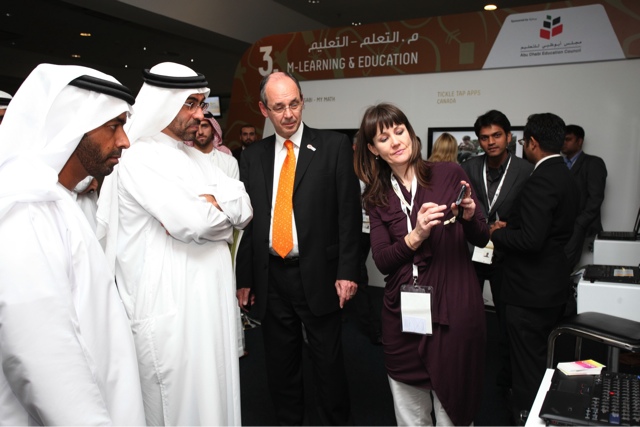 K.Line said…
Lisa: What a gorgeous post. I'm curious to know if the PEC system has also facilitated (as a side product) improved learning of verbal communication? Or are they completely separate brain functions?
October 19, 2011 at 3:29 PM

Lisamaree said…
One supports the other K. It's like remembering the name of a taste- using two senses at once helps us to learn xx
xx
October 19, 2011 at 3:33 PM

Make Do Style said…
I love this story - it is so true. I never say a bad word about Apple because I always think of Grace!!

Apps for Autism: Communicating on the iPad : http://bit.ly/rtN9Sv - via 60Minutes for CBSNews