on February 03, 2013
While I realise that the above title may have lead you to think that this was a post about another kind of "diversity" - the  "It Gets Better" I'm talking about is my journey with Autism and my teenage son, and how it has got a whole lot better.

How did we do it? While it would be tempting to give credit to one thing (and then write a best selling book about it)  it is best to remember the science and take into account that:

Correlation does not imply causation

I did not do one thing at a time, I did not run a placebo group and I had a number of variables over which I had no control. We did change 3 things which together seem to have worked.
*knocks on wood*

As I have previously described, we got Liam's bed out of the open attic space and into a big room with a door that can be locked. He has his computer, an old tv and a vcr in there and his video collection. He can do all the things a teen needs to do including play with his iPad, iPhone and watch "Rated 15" videos in privacy.

We also kicked him out of the Living Room which had been "his" dominant space and had cable connected in the attic where all his DVDs are. He can control the tv up there, but he is no longer allowed to decide what everyone else is watching. I turned the living room into our bedroom and got rid of the DVDs, books and anything Liam felt ownership of.

When a meltdown/tantrum happens I can get him into his bedroom and lock the door. During the worst tantrums, he seems to *need* to break something as a release. And I have always fixed/replaced things going as far as to take out accidental damage insurance with all our electronic purchases from the same chain store. If you can get it back into the original box, they sometimes replace it under warranty. ;)

On the advice of our BT I have stopped engaging with him while he was acting out and instead just push this sign under the door: 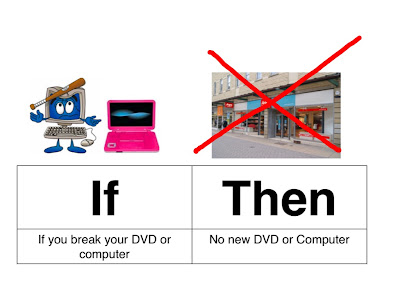 The last time he broke his iPhone we simply couldn't repair it. So he did without one for 2 weeks.
To earn it back he had to complete 7 forest walks, which was a way for us to get him to exercise. Getting big boys outdoors is a time honored way to deal with aggression and it applies to Autistic teens too.

Earning the precious iPhone back was a way of pairing him with forest walks again.
By the time he had crossed off all the tokens, he was in the habit of walking, so we just set another goal. The reason we use a printed token system is that it gives Liam complete control. They use velcro systems in school and had sometimes taken tokens away as a consequence for off-task behaviour. This system is static. If he walks, he earns.

The replacement iPhone is a 2. It's slower, has worse reception and does not run the software required for communication apps - otherwise I would have given it to a non-verbal child. So he has had to live with permanent consequences for that last breakage. It seems to have worked. During his last tantrum he pulled all the drawers out of his bureau and broke one of Gracie's videos!


The other major change was how we behaved with Liam. This problem had started at home but had escalated at school too. So his classroom teacher and 1-1 tutors have been very closely involved with supporting us. They made a commitment to be very consistent and firm as Liam's anxiety is always increased in relation to how much lee-way he thinks he has. His father and I had to do the same.

Over Christmas, we discouraged all visitors (because they are inconsistent variables) and did not go anywhere other than the mountains for long walks. Liam also started attending an ABA respite centre for a few hours each week. While they are doing their best to "pair" with Liam by setting up a video player and letting him use their computer, this is very much a neutral zone where he is not the boss and has to follow other people's rules.

The last change was under the direction of his wonderful psychiatrist. Liam had been on Abilify to control his impulsivity and self harm. When he escalated, we increased the dose but it seemed to make him worse. So after observation and consultation over a number of weeks we switched to Respiradal, the medication his little sister takes. This has made a HUGE difference.

By consultation and observation, I mean the Psychiatrist met Liam several times and observed him in his school setting. She spoke to me and his Behavioural Director at school and our family G.P.
All medications have side effects so it is a matter of finding the right amount of net benefit in balance with the potential problems like an increase in appetite and weight gain. He has to have fasting blood tests and an ECG every 6 months.

I was really very moved by the response to my other post about the rise in Teenage Anxiety in our home.
I got so many comments and page views, I realised that I am not the only one who missed out on the "Rainbow Unicorn" as one parent of an autistic teen put it.
But I never wanted anyone to feel sorry for me. No one does. I met a lady last week who identified with my story because she often finds that people judge her on her "good days' and think that she isn't that "disabled" and should just get on with it. That meant a lot.

But things are better and I have to say we got a lot of help.  I am very grateful to my son's school teacher, his 1-1 tutors, our marvelous Behavioural Director, the Psychiatrist who is like a family friend, our GP and the respite centre staff.

Not only were they a practical support but they gave me and Liam's father a sense of moral support, that we were not alone and things would get better. And they did. xx

jazzygal said…
I am so delighted to hear that things have improved for you guys and for Liam too :-)

Secret photography refers to the use of an image or video recording device to photograph or film a person who is unaware that they are being intentionally photographed or filmed.
It is sometimes called covert photography, a term used mostly among professional investigators, or unauthorized photography.
Secret Photography Techniques
ipad training course