Mummy's note:
Grace is very fortunate to attend a school which up until the middle of 2013* had a full team of Behaviour Analysts, supervisors and tutors working together. This meant that particular goals such as self care, hygiene and independent life skills could be broken down and taught in a highly individualised method. It takes into account the pre-existing skills and preferred method of learning which is of course the best way of teaching each individual. I must stress that this, therefore is not a one size fits all method of teaching every girl with Autism to manage her period herself. However, there may be some information that can help you plan and implement an individual program for a girl in your care so I am sharing it here.
If you need help, please contact your local behaviour analysts organisation for advice from a qualified therapist. In Ireland I suggest ABA Ireland.


How we taught Grace to look after her periods, herself using Applied Behavourial Analysis.


"A few years ago when we were looking at Grace and what's next for her we decided that although she was only 9/10 years old we needed to start planning ahead for the changes that her body was going to go through.
The difficulty with puberty is the 'not knowing' when it would arrive we decided to begin programs to start preparing her for the changes she would inevitably encounter.

All of us learn about puberty in various ways, and in teaching someone with additional needs a skill you work with them and work with the skills they have. Hopefully you have given them pre requiste skills in order to then move onto more complex targets.

When we designed Graces program and determined what components would best suit Grace we looked at what skills she currently had and how could we build on these.  Grace was a very visual learner, she could discriminate between things and concepts such as clean and dirty, she could sequence and she was able to use the toilet independently.  All these skills were in place prior to beginning her puberty program.

For Grace we decided to do a number of targets that combined would be her plan to teach her about her period as it were.

We initially began with teaching Grace how to put a pad on a knickers at the desk so she could practice putting on and taking off a sanitary pad. This she accomplished very quickly and we then moved on and probed to see if Grace would first tolerate wearing a sanitary pad. Initially she struggled with wearing the pad for any length of time so we had to SHAPE this.

To do this we started by having her wear a panty liner for short periods of time and systematically increased the time she would wear the liner for.

Once Grace tolerated this we then started GENERALIZING this skill so she would tolerate wearing a variety of brands of liners and then moved onto pads. As in the past Grace had a tendency to only tolerate and use certain brands. We wanted to make sure she would wear a variety of pads as sometimes the brand one would normally use may not be available.
Once this had been taught we then looked at the steps required to put on a sanitary pad and how many steps Grace would need visual assistance with.

How we broke down all the steps required to teach her how to go to the bathroom to change a pad was done with a TASK ANALYSIS and we used a VISUAL SCHEDULE as a prompt for Grace. The reason for this was if Grace always needs a visual schedule to assist her with the steps this was an acceptable way that she could be prompted through the steps but still maintain her independence. Again focusing on Graces strengths we used real photos rather than generic cartoon ones as this was concrete to Grace and are more relevant to her as she uses actual pictures with her communication device. (Grace App)

As again our goal was that Grace became independent we programmed a reminder into her iPhone that went off every 2 hours to prompt her to go to the bathroom, so again she would not have to rely on another person to remind her to go change her pad. Once she went to the bathroom,  she would follow the sequence of steps visually represented to her in pictures.

I would love to say here are the steps and go for it but unfortunately you have to individualize the required number of steps and visuals for each individual person. 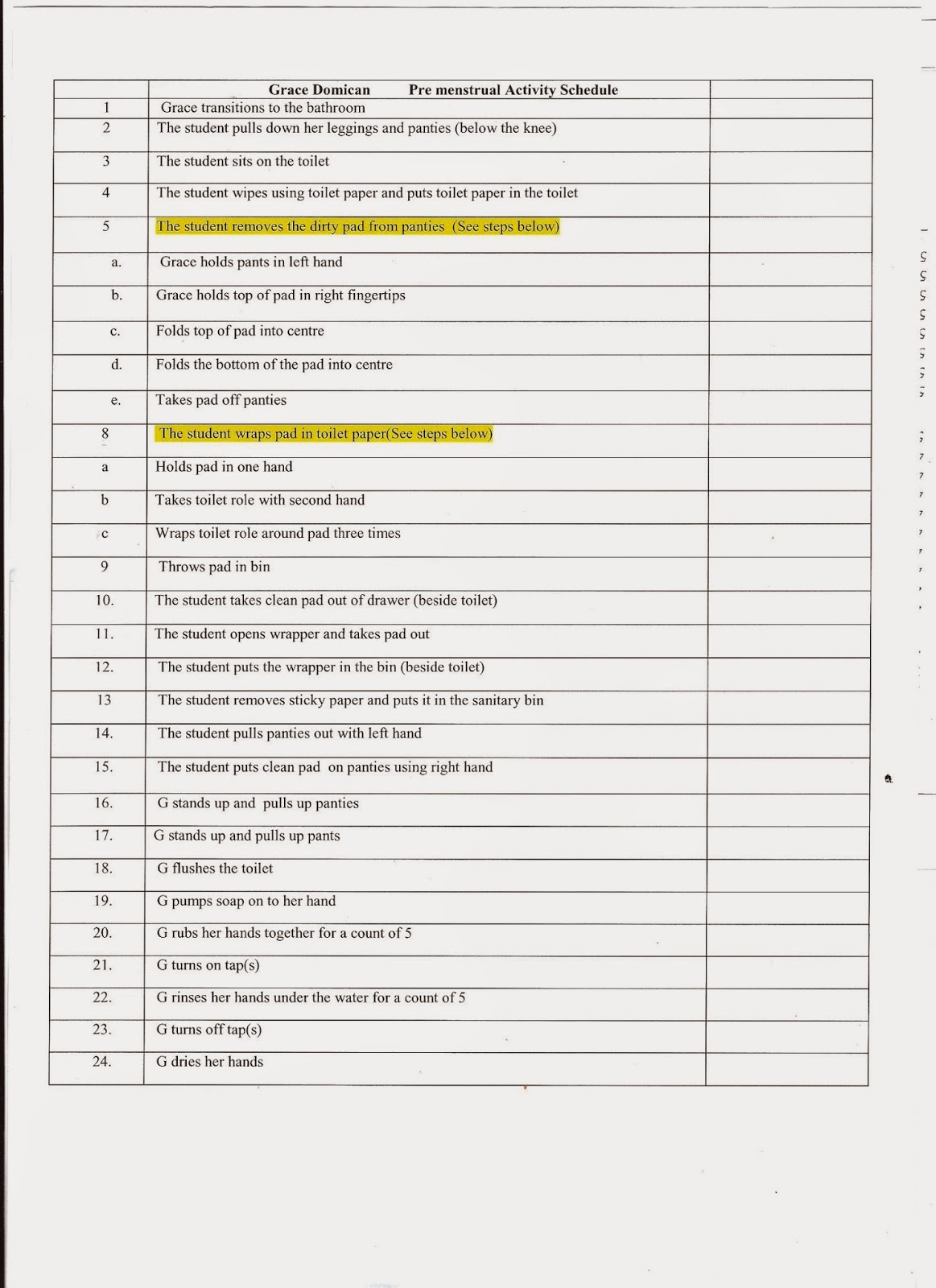 Once Grace began to carry out the program we had tweak her task analysis and break some of the steps down even more. If we had 3 consecutive days where Grace struggled with a particular step we would amend the task analysis to break that particular step down further. For example with her program we had to amend removing the sanitary pad steps down even more.

Simultaneously while teaching her the steps of the program on how to change a pad we also had to teach her the difference between clean and dirty pads so we contrived this situation again in the bathroom with pads that had red food dye on them to simulate a dirty pad.
Grace had to discriminate between the clean folded pads and the dirty pads with the food dye and place the dirty pads in the bin.

Along with this task we created a sequencing social story “Getting My Period” for her using the same visuals as the visual schedule she used in the bathroom to change the pad. At the table we presented Grace with three pictures on the table one was the correct picture and 2 pictures were distracters.
The tutor would read a sentence about getting her period and Grace would select the correct picture and put it on the book and the tutor would move onto the next sentence of the story. This was able to bring together all the individual targets we were working on and link them together.

Once Grace had mastered the skill of putting on a pad and changing it, she still had not gotten her period but we continued to practice the skill with her daily using panty liners and then for a few days in the month we would change to sanitary pads to ensure she was still tolerating wearing the pads. Ensuring she had learned the skill was fantastic.
We then needed to make sure she maintained the skill with repetition.

The good news is when puberty eventually hit as it was inevitably going too, Grace was prepared. Unfortunately, as nature often does, her period came at the most inopportune time, Grace's Mom was 17,000 miles away in Australia.
But Grace was able to manage this life event with minimal involvement from her Dad while maintaining her independence. GO GRACIE!!!!!

There are many resources helpful in assisting with puberty for teenagers with additional needs but the book possibly most helpful and user friendly is called "Taking Care of Myself, A health hygiene puberty and personal curriculum for young people with Autism" by Mary Wrobel.

Also there are many websites and articles you can go to find out more about SHAPING, GENERALISING, TASK ANALYSIS and other methods to teach skills not just about periods but for a variety of other skills.

The most important thing to remember though is, the most successful program has to be individualized to the learner."

*In 2012 the school was taken over by the Department of Education as parents could no longer afford to fundraise to cover all salaries. The department has left funding in place for one behavioural director for 24 children for the next few years. There is no provision for the 2 behavioural supervisors who would have assisted with 12 pupils' individual education plans as per the previous model. This makes it a lot harder to implement the kind of intensive planning that went in to this particular program.

By using ABA, we were able to teach Grace to take care of something that is essentially a life skill independently and with the privacy and dignity that she deserves. Without it, she would have been dependent on others for one week of every month for the next 40 years. In certain settings this would require an extra female member of staff with the appropriate health and personal safety qualifications. Thank you ABA!

Pixieforher said…
Pixie pad for period are made from 100% organic cotton which provides complete protection from leakage. These pads are very thin and super-absorbent, you will feel comfortable with it. Visit our website for purchasing or if you want to know more about Pixie pad for period.
August 25, 2021 at 2:40 PM